Founded in 1890, Hansen Bros. Moving & Storage has successfully weathered many history-changing events including the Great Seattle Fire, WWI, the Spanish Flu of 1918, the Great Depression, WWII, the 2008 recession, and 9/11 among many other public crises. The health & safety of our customers, staff, service providers, and local community are paramount and we continue to adhere to all directives from local, state, and federal government agencies.
Although many unknowns still remain, rest assured that Hansen Bros. will be timely and transparent in our communications regarding servicing your moving & storage needs. Our professional relocation consultants will work diligently to offer creative solutions in the event your project is impacted by the current health crisis.

OUR ACTIONS FOR COVID-19

All Hansen Bros. Employees are instructed and expected to follow the guidelines provided by the CDC. This includes:

Hansen Bros. requests the following of our customers:

Here are some informative and helpful resources about COVID-19:

The team at Hansen Bros. is proud to continue offering our wide range of services in accordance with the necessary precautions outlined above. Whether you are planning to move your household or business down the street, across the country, or around the world, we’re here to make the process seamless & safe for you, just as we’ve done for well over a century!

After being in the moving and storage business since 1890, Hansen Bros. Moving & Storage has had the opportunity to service some truly unique moving projects. Thanks to years of experience, well trained crews, and a dedication to customer service, we have had some remarkable success stories with unique projects. These are just a few of the projects but we will post more in the future. We hope that you enjoy some of our photos and encourage you to contact us if you have a unique moving project!

Hansen Bros. Moving & Storage is proud to be the exclusive Seattle mover for the relocation of the Museum of History and Industry (MOHAI) to their new location at the Armory Building in South Lake Union. For information about this project and exciting updates, please click here

The movers were great, but it was like pulling teeth to get someone from the sales office to call me back so that I could schedule an appt for my stuff to be moved out of your storage. And even after I finally got someone to work with, there was no confirmation that paperwork was received and everything was good to go. But back to the movers. Jasper and Anthony were very professional and courteous. They did a great job unloading my furtniture and putting it in my house. They are the only reason I would recommend Hansen's to others.

Hansen Bros. was selected to handle the Son of Heaven exhibit when it arrived for a tour in the United States. Because of the political climate at the time and being the first rare artifacts of this nature to be sent to the United States from China high security was required. The exhibit was split up into multiple planes to insure if something was to happen during the flight the entire exhibit would not be lost. Hansen Bros met each plane load to delicately handle the 1,000’s year old items. Accompanied by security the exhibit was transported to the exhibition hall where Hansen Bros. assisted the Chinese and local curators removing and placing the items for display. 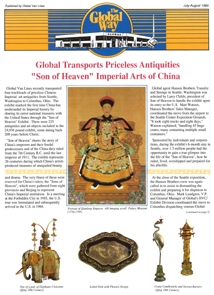 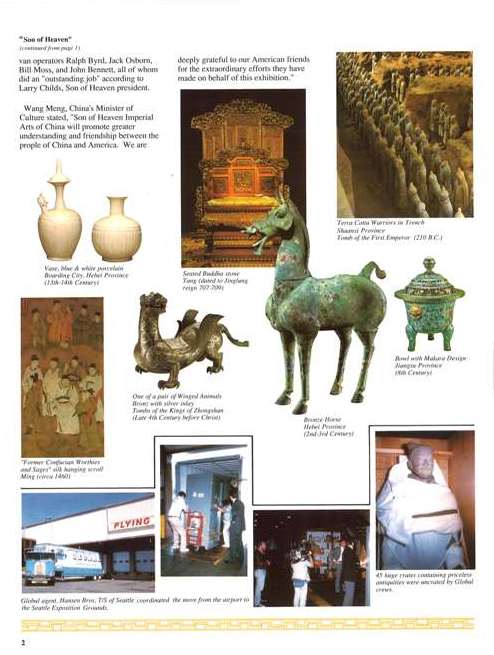 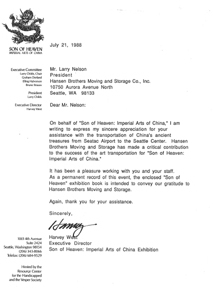 Sometimes oversize items do not fit where customers would like them. In this case the piano needed to be placed in the top floor room of the residence. Unfortunately the stairwell would not accommodate the size of the piano so we used a crane. We have also used a crane to shoot a piano out onto the top floor of a houseboat. 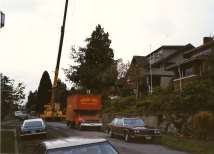 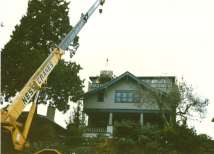 One of our customers called upon us to ship a Cessna 288 airplane from New York to Tukwila, WA. We have also shipped float plane pontoons from Florida to Kenmore WA. 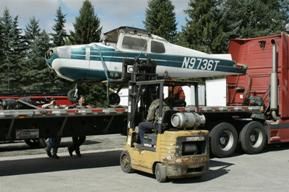 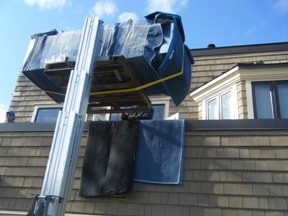 Hansen Bros. received large laundry machines to hold until the location was prepared in a large hotel. The access was through an underground loading area necessitating a low height van with a lift gate and a forklift. Walls had to be removed so the old equipment could be removed and the new machine could be put in place. 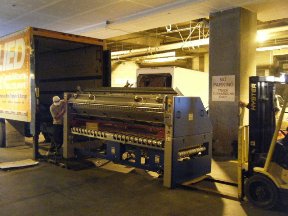 Many residential locations have tight access so long or bulky sofas will not fit through the halls, stairs and doorways. This is an example of a sofa being put through a second floor window. The sofa is prepared by pad wrapping then stretch wrapping it in plastic to ensure its safety. 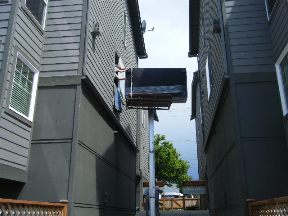 Many retail commercial buildings require early morning or late evening deliveries so as not to interfere with the shoppers. This was an early delivery of new store displays and fixtures at a local mall. 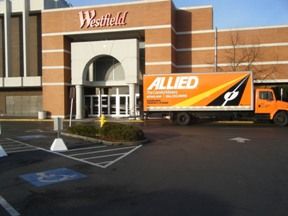 This telegraph was from a WWII Naval Liberty Ship and was purchased in 1972 from Cutty Sark in Seattle. The owner of the telegraph hired Hansen Bros. to crate and ship the telegraph to his brother living in another state. 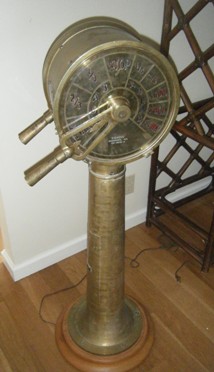 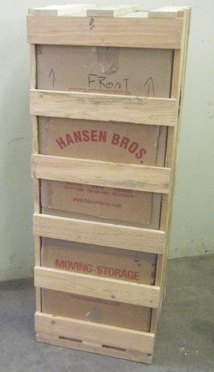 According to UW, the origin of the helmet car is believed to be traced back to the 1977 season, when the Huskies won the Pac-8 championship and earned a trip to the Rose Bowl. Several supporters hoped to drive the helmet car down to Pasadena, Calif., and into the Rose Bowl Parade, but the car never made the trip that year. It is believed that in the following season, the helmet car started circling the track after every UW score, with members of the UW band and cheer squad riding in celebration.

The Husky Helmet Car was displaced from Husky stadium due to the $261 million renovation project in 2013 and it was donated to the Museum of History and Industry. The helmet is all fiberglass and mounted to an early 60’s VW chassis. It is approx. 10′ tall 8′ wide and 13 feet long. It weighs about 2,000 lbs. Hansen Bros. carefully relocated the Husky Helmet Car from South Lake Union to Georgetown. 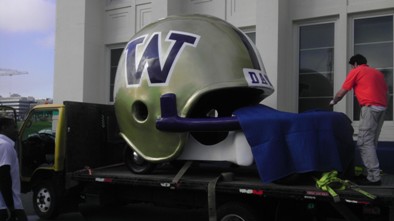 Ensure a trouble-free move with the help of our free moving resources:

Let our team put together a comprehensive moving plan for you. Complete our simple free quote form or contact us at 1-888-300-7222.